One of the respondents was servingb, a regular blogger and commenter here. He responded that they had made a video and posted it to SpankingTube. Although I scan his blog on a regular basis, I must have missed his mention of it. He noted that on Spankingtube he was surprised that he had received negative comments. I suppose it’s not really surprising since people too often tend to be rude on the internet. It’s an unfortunate fact that people behave badly on the internet. The net is anonymous (mostly) and people routinely misbehave on the net. Well, lets at least hope whoever was rude to servingb got a good spanking for it. Or worse, no spanking for their bad behaviour!

The following is my response to that thread:

> What surprised me were the negative comments from folks on spanking tube. - @Servingb

It's a fact that the internet lets people be assholes. People constantly act in fashions that they would be too ashamed to act in person.

When it comes to spanking videos, I think a lot of it has to do with someone being able to picture themselves in the video. Also, I believe a level of nostalgia comes in to play

I notice a lot of the crowd that enjoys F/m Spanking has an intrest in some older 'classic' F/m spanking videos that just don't do it for me. I think in that particular case people enjoyed them years ago since that may have been all that was around except older 8mm stuff. Not having had my intrest developed at that time, perhaps I just don't have a basis for those 'classic' videos to appeal to me.

We've thought about doing some videos, but we lack the equipment. Also, one of the things that is an issue is we lack what could best be described as an area that could be devoted to spanking. Let's call it studio space and/or furniture that could staged for a spanking. 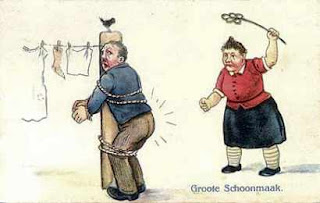 When I do watch videos although I' a Switch I usually only enjoy watching F/m Spanking. For me what appeals to me is real spankings... Not faked, no starlets, not contrived reasons for spankings and spankings that look like "Yeah, that's going to hurt in the morning...".

Also, it would appear that being a spanko does not make someone an actor... So, too much dialogue is almost certainly a turnoff for me. Perhaps my masochist side comes out too, I enjoy videos of spankings that would scare the shit out of me to think that they could happen to me.
The more severe or the scarier the implement assortment the better. 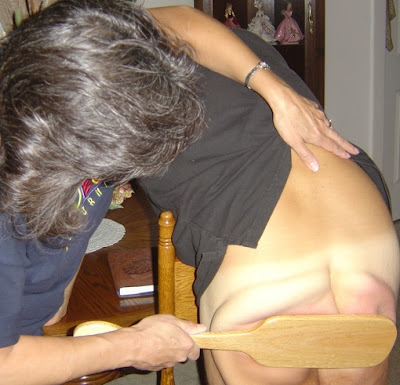 For me also what I can find appealing are traditional things that enhance a spanking. Whereas items like a prison strap, barber strop, frat paddle, large Spencer paddles and heavy loopys may offer fear factors, a hairbrush offers nostalgia. Not to mention my affinity for a woman spanker in a cocktail dress and modest heels. To me, those things offer a certainty that the spanking is going to happen, nothing will stop it and by the time it’s over there is going to be one VERY sore ass.

Naturally, I imagine it’s going to be mine.
Posted by OnHerKnee at 11:19 AM