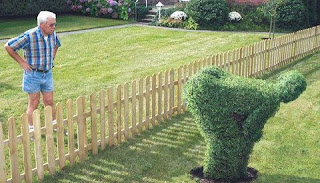 No, don't get your hopes up.

I haven't been out stopping cars in the street telling the neighbors that they have ugly children (I've thought about it though).


I haven't been telling them that they have pathetic unkempt lawns (ours is worse).

I haven't been telling neighbors that the reason we have loud parties and they don't is because we have friends and they don't (We don't have parties, except the ones in the bedroom).

Actually, I'm not a neighbor kind of guy at all, my favorite neighbors are trees.

No, what I'm talking about... are all the 'B' movies that are on the interwebs for the enjoyment of we spankos... Poor acting... inept dialogue, bad camera angles, sometimes silly costumes and woefully inadequte lighting...

You know, on Spanking Tube.

You could say I’m throwing my critique in the direction of our spanking neighbors.


Yes of course one never knows, some of these people who post these videos might actually be neighbors; Perhaps a few doors down or who knows, people I’ve met in the convenience store and just failed to start a spanking conversation with.

Now don't get me wrong, I admire the kahonies of anyone who willingly climbs over a lap for a butt blistering on what amounts to INTERNATIONAL TV.

Especially those who don't get concerned about having their faces seen in the videos.

Obviously, there are the pros who do so in an effort to self-promote their talent and frankly there are some true talents out there in the spanking world. I'm more specificly talking about those actual DD-ish 'normal' couples who manage to apply implement to posterior skin.

For quite some time now I've had four videos visible at the bottom of this blog. For all I know, since I usually have the settings on this blog set to display between 10 and 18 blog posts many of you may get bored and leave long before you ever get to the bottom of the page; You may never have seen them.

Personally I consider these videos a few of the better F/M-ish videos of the homemade genre. For the ease of the reader I’m dupe posting the videos that I intend to comment on today.

I suppose what I like about them is that they are pretty no-nonsense kind of spanking videos. They haven’t been clouded with unnecessary distractions... like a plot. Too much talking qualifies as a plot.

After all, we spankos when we voyeur our way into watching a spanking video imagine ourselves in the video and expecting us to get into a plot scenario is expecting a little too much from we the audience IMHO.

Now one of them is some poor lucky fellow with his jewels pinched in a humbler. Frankly, I’ve never had the pleasure, but he appears to be a little too horizontal for the humbler to be very comfortable.

Not that a humbler is supposed to be comfortable, in fact I’m somewhat certain the design specifications for a humbler most likely totally lack the word ‘comfort’.

In any event, our hero is actually experiencing a bit of discomfort to say the least and the protagonist is most definitely contributing to his discomfort with what appears to be a rather liberal application of the paddle.

Overall, not a bad little short that’s sure to provide a moment of contemplation to any F/M spanking aficionado.

Another one of the videos at the bottom of the blog page features one particular couple that apparently wants to set a spanking records of some sort.

The video is part of a set of videos. I think there’s one where he enjoys a quick easy twenty swats and perhaps another where he manages to get a nice helping of fifty.

Here in the subject of my review, the fellow succombs to 100 hard wacks with a paddle.

Now I’m all for sports and competition, I believe it builds character and strong bodies in at least 12 ways… sort of a Wonder Bread of American life. (If you never watched US television comercials from the 60’s don’t expect to understand that last coment).

If I were to be too critical, I might point out that there are probably heavier or more stingy paddles out there available for real record setting endeavors.

I might point out that I’ve received some harder swats from My Fine Lady.

I might point out that laying down on tummy and ‘not’ having ass propped high in the breeze makes it a bit easier.

I might point out that being bent over and touching toes would be far more painful.

But, I’m not going to actually point out any of those things because that appears to be one determined lady who wants to show off the rather impressive beating her man accepts under her paddle-happy hand and I don't really want to consider myself a challenger for their well deserved record.

Shit, I can take a mighty hard set of swings from a mighty heavy and thick paddle, but I kind of need at least a few minutes before the second “Thank you dear, may I have another” ass-whack.

You see it’s not that I really like breathing, but I’ve gotten rather used to it over the years.

More reviews and personal insights to follow in the coming days.
Posted by OnHerKnee at 1:45 PM