Teetering on The Edge 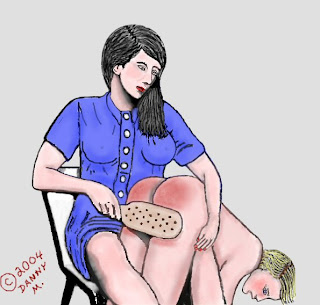 Without a doubt the most difficult thing for me to do while being spanked is staying in place.

Am I the only one?

I've rambled on before about the fact that we may be in need of a spanking bench. Well, there are a couple of problems with the idea, not the least of which is my ability to turn a perfectly good piece of wood into a worthless pile of sawdust.

Don't get me wrong, I'm not a total ditz. However if the subject of my labor doesn't have spark plugs and hold at least several quarts of oil it's pretty much a sure thing that the project won't go too well. 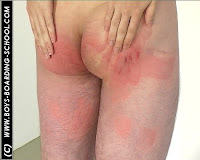 The low cost alternative would be to simply use some ropes or inexpensive cargo tie-down straps.
Quite a while ago I managed to install some tie down loops to the bed frame without turning the bed into a worthless pile of sawdust, I was rather proud of myself and I believe rightfully so.
I also placed within reach several ropes and ratcheting cargo straps for convenient use by my lady, should she ever decide that thy could help in her eforts.
Now don't get me wrong she's a very intelligent woman, but it would appear that ratcheting cargo straps in her hands are about as useful as woodworking tools are in my hands.
Lacking any of the above retention aids the only thing that keeps me in place is my willpower and that doesn't always work very well as I can be something of a weenie. Now that's probably the way it should be I suppose with willpower alone, but it would likely be much easier for her to spank me if she didn't have to put so much effort into controlling my kicking and squirming. 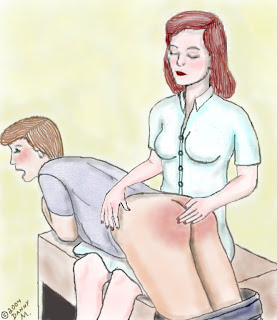 Long ago when I first got into spanking activities I had no idea just how much I had to learn, actually from both sides of the paddle no matter if I was giving or receiving.
Like many people first starting out, I thought the objet was to get the spankee's ass as sore as possible as quickly as possible and to make it totally unbearable.
Several years worth of swinging paddles and also being face down have taught me that the best results come from a slow steady build up that often begins with a hand spanking which gradually progresses to more intensity, faster delivery and ultimately the conversion to action with a totally scary implement.
Have I ever mentioned how much I hate the hairbrush paddle?

But back on topic...
Being a member of what could well be described as something of a Mutual DD relationship has its benefits. I happen to be one of those people that believes the best spankers, have lots of experience as spankees. Often the case in life, there is no real substitute for experience. Keeping that in mind, unfortuanatley I see no future in teaching a class on how to spank at the local Community College unless it involves lots of hands-on lab work.

But again, back on topic...

My fine lady having been an accomplished spankee in her own right, has proven to be an all too effective spanker. Almost every time she spanks me she manages to get the same result yet uses different tactics and sequences each amd every time.

Whenever she might have good cause to be pissed at me, it's pretty much a sure thing I'm going to be spending some time over a stack of pillows and hopefully not at the very beginning of the inevitable and certainly inescapeable punishment spanking.

There's something very difficult about submitting to the intense cracks of the cane or wicked slaps of the Discipline Strap on an un-warmed butt and still managing to stay in place while not being in direct contact as when over her knee.

She has gotten very good, perhaps too good at identifying my tolerance and at keeping me teetering on the edge of being able to stay in place. 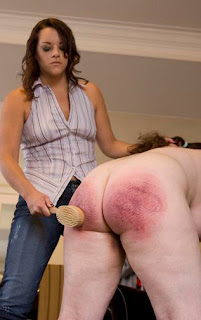 I'm sure all you spankees out there in Internet Land know exactly what I'm talking about...

Now the implications of that position are well known to we lucky few. We few, we proud, we both reluctant and willing spankees.

Mr. Happy somehow finds a comfortable place to rest and contemplate the situation until he runs for cover. The warm-up progresses to an intensity where the sting is really beginning to wake up the brain and before long, naturally there is some sort of wicked device that just manages to make it damn near impossible to stay in place, but I usually do anyway.

Somehow, she manages to keep it just doable and when she does the spanking can, and usually does last for quite a long time. When completed, I will have a memory that will have continued reminders that hang around for perhaps a day or three or if lucky... indeed more.

Yep, I'm in love with her!
She is such a wonderful human being, but more importantly, she is my woman.


Atwork by Danny M, Phtotos from Miss Holley and Boys Boading School.
Posted by OnHerKnee at 6:24 AM